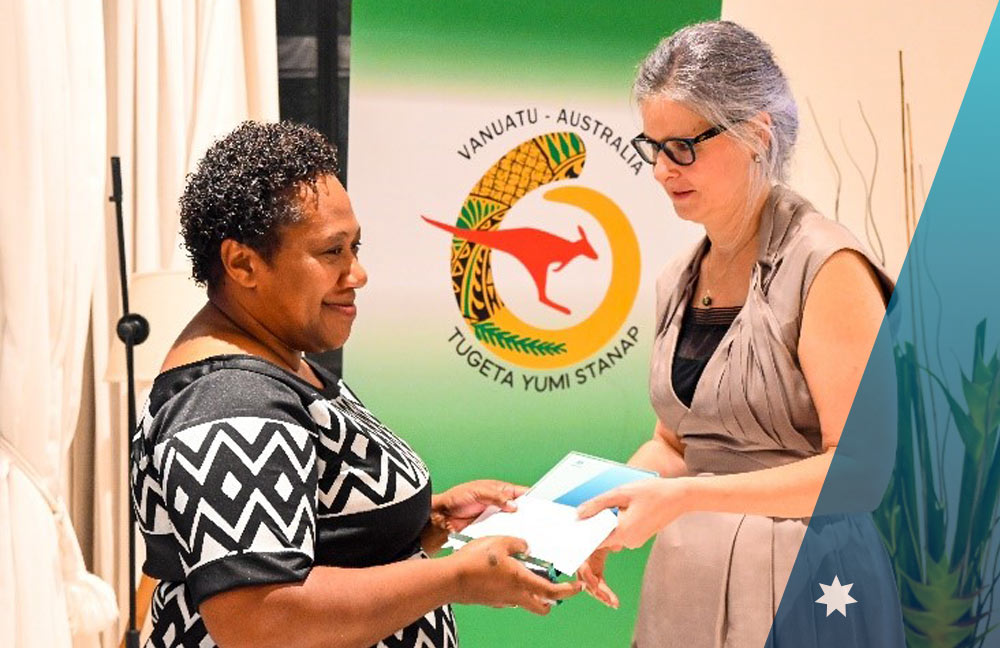 Shirley Tokon receives the Alumnus of the Year Award in Vanuatu

Joining a growing cohort of women across the Pacific dismantling gender stereotypes Shirley Tokon was recently announced as the winner of the inaugural Australia Awards Vanuatu Alumnus of the Year.

Making the presentation, Australia’s High Commissioner to Vanuatu, Her Excellency Heidi Bootle noted Shirley’s distinguished career success and outstanding service to her community. This service includes her role as the female president of North Efate football club in Vanuatu alongside her leadership role in the health sector.

As an Australia Awards graduate, Shirley received a Master degree in International Public Health from the University of New South Wales in 2012. In her current role as Lead Facilitator of the Australian-funded Vanuatu Health Program Shirley is responsible for managing the ongoing response to COVID-19 and Tropical Cyclone Harold, while continuing to support the delivery of improved health services to the people of Vanuatu.

Shirley attributes the Australia Awards as a key factor that helped forge her career; providing her with the confidence, capacity and skillset to reach her professional goals. “My time as an Australia Awards recipient helped enormously, providing a worldly experience and different perspectives. The investment made in each Australia Awards graduate is of great worth beyond just the individual. It helps us to benefit our wider communities and country as a whole.“

Shirley joins a small but growing number of Ni-Vanuatu women who hold a Master degree providing inspiration and leadership to a new generation of young women in Vanuatu.