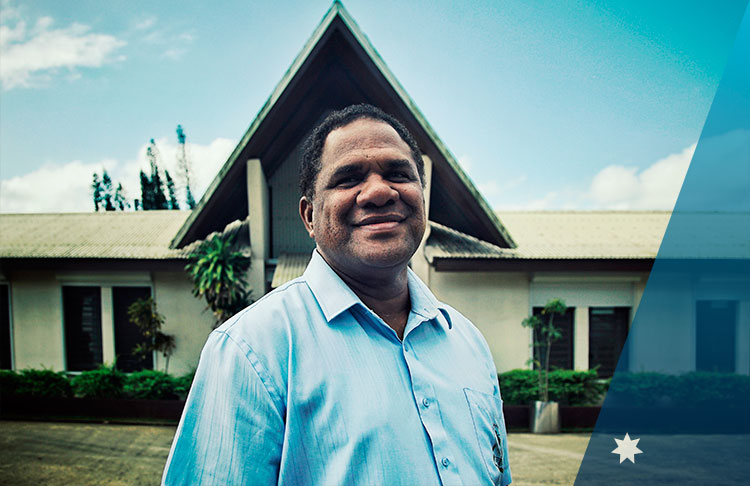 This is Dick Hopkins, a newly returned Australia Awards Vanuatu Graduate who completed a Master in Education from the University of Wollongong, Australia in July 2019.

Dick was a former Science and French teacher who worked his way up the ladder. From teaching, he soon became the Principal of Arep High School, then moved on to be the Principal Education Officer (PEO) for Torba for three years. Through his commitment and hard work in this management role, he was promoted and appointed Principal Officer of the Education Services Unit at the Ministry of Education and Training.

It was a big role and even though he had considerable work experience, he felt he needed to further develop his expertise through a relevant academic qualification and capacity, so he applied for and was successful for an Australian Award to study for a Master in Education in 2017.

‘It was challenging, even more so as a francophone student, but I did a three months English tertiary course in advance, which really helped with my studies,’ he said. ‘But the good thing is that in being bilingual, I am able to assist in drafting plans, policies and guidelines for the educational sector in both French and English, which is very vital for a bilingual country like Vanuatu.’

Dick returned and took over the permanent role of Principal Education Officer and often acts as deputy to the Director of the Education Services Directorate, which covers curriculum development, examinations, early childhood, primary and secondary school, national program, TVET in schools and the principal education officers in the provinces around Vanuatu.

‘My role in the Education Services Directorate comes with a lot of responsibilities and I used to rely on my experiences and technical advisors who came in to assist us. But with the qualification I got from the Australia Awards, I have a renewed confidence and see a capacity within me that I did not have before. I understand coordination better, I have learnt how to deal with issues, put theories into context, and how to do research work in the English context.’ Dick Hopkins hopes that with his newly gained qualification and level of leadership, he can be a source of support in strengthening the country’s education system and offering training guides to the other principal education officers in the outer provinces of Vanuatu.