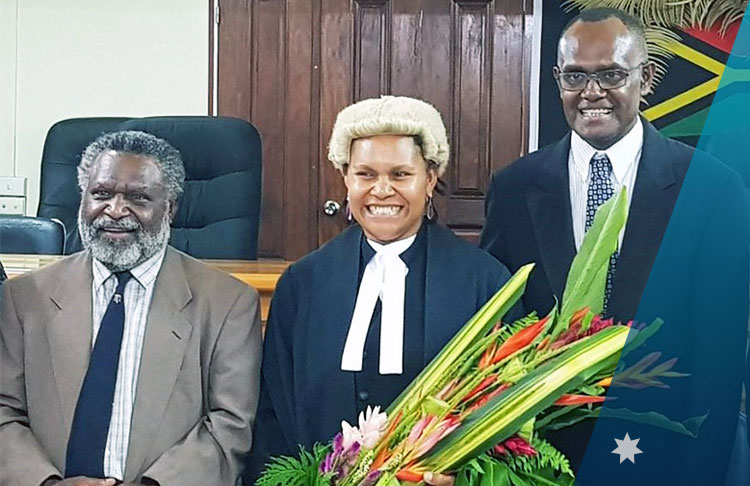 It was early 2010 and Viran was a mother of two very young children when her husband was given an Australian Award to study at the University of Canberra. She had no desire to separate her young family and wanted to support her husband, so she took leave from her job as Solicitor General within the State Law Office and they all moved to Australia.

Viran made use of the opportunity of being overseas by also enrolling herself in a Masters program at the Australia National University. She initially self-funded her studies and was also supported by the Vanuatu Government for a semester. She applied for and was awarded an Australian Award for her final semester to complete her Master of Public Policy and graduated at the end of 2011.

‘I really appreciated being given an Australian scholarship for further studies and having the opportunity to learn in an area that I was really interested in,’ says Viran. ‘My Masters studies opened up my mind to so many areas of learning and gave me the tools for critical thinking, which really exceeded my expectations. Coming back from my studies to my former employment at the State Law Office, I hit the ground running and built from that experience right up to where I am today.’

In February 2016, she moved from the State Law Office to join the Australian Government-funded Stretem Rod blong Jastis mo Sefti (Vanuatu Australia Policing and Justice Program), where she worked as the Program Coordinator (Justice).

On the 15th of July 2019, Mrs. Viran Molisa-Trief was officially sworn in as Vanuatu’s first ever Ni-Vanuatu female judge of the Supreme Court. When asked her opinion of handling this huge responsibility, the now mother-of-three responds with a smile, ‘I have always wanted to serve the Government, and work for the people of the Republic of Vanuatu.’

‘I am blessed with a man who has always supported me wholeheartedly, as well as my children and family. My parents did too ever since I was born. I am grateful to all the people who have supported me at key points in my life and my work journey to make me who I am today.’

Viran is also appreciative of the Australia Awards alumni network and strives to attend the monthly alumni events that interest her.

‘Every time I go, I meet new people and find myself amongst other professionals that I would otherwise not get to meet at all. For those of us who have studied under an Australian Award, knowing that we have this common bond has an unconscious effect of connecting us to the award and the country.’

When asked what she had to say to other women who aspire to be leaders in the midst of managing their family, Viran gives an even bigger smile and answers, ‘Finding your work-life balance is really important for your own health and being.’

As this alumna reaches this distinguished level in her professional career, she is a shining example to aspiring women leaders all over the country and a great ambassador for Australia Awards.